San Francisco Zen Center’s first central abbot, Myogen Steve Stücky, died shortly after 4:00 on the morning of December 31 at his home in Rohnert Park, California. He was 67. 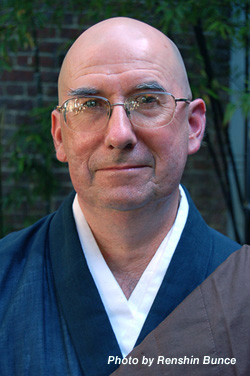 Since receiving a diagnosis of stage IV pancreatic cancer in late September, he has been widely admired for courageously sharing publicly his ongoing personal process of living with terminal illness, first in a dharma talk titled “Gratitude,” given two days after receiving his diagnosis, and subsequently with posts on his Subtle Eye blog. His longtime emphasis on body practice—learning from and respecting the body—took on a particular poignancy in the months leading up to his death. As he said in his talk, “Each of us can do something, right up to the last moment.”

Myogen, also known for the last seven years as “Abbot Steve,” was born in Chicago, Illinois, and grew up in Newton, Kansas, with two brothers and a sister in a family of Mennonite farmers. This upbringing imbued him with a sense of mission, and he retained a serious regard for personal purpose in life. While in Chicago as a conscientious objector from 1966 to 1968 during the Vietnam War, he worked in the inner city helping urban youth discover alternatives to gang life. His deep concern for social justice and diversity found further expression in later years as a Buddhist, such as the recent Zen Center initiative he led to openly examine the issue of white privilege within the organization.

As a young adult, a driving question for Steve was about how reality is perceived, and how to clear the doors of perception. In Chicago in 1971 a friend, Bob Lewis, gave him a copy of The Three Pillars of Zen, by Philip Kapleau. Eventually he read Zen Mind, Beginners Mind and became interested in Shunryu Suzuki Roshi. In 1972 he hitchiked to San Francisco, at first sleeping in Golden Gate Park and stashing his sleeping bag in the bushes during the day in order to go to meditation at San Francisco Zen Center.

He stayed for the next eight years, studying with various Zen teachers, including Zentatsu Richard Baker, Dainin Katagiri, Robert Aitken and Tenshin Reb Anderson, and residing at each of Zen Center’s three temples during that time. He played a particularly important role at Green Gulch Farm from its Zen Center beginnings, when no other pioneer resident had any farming experience.

From 1983 to 2006, he supported his family as a householder priest by designing and building many gardens as a landscape designer/contractor, and living in Mill Valley, San Rafael and Rohnert Park. Not surprisingly, as a Zen teacher he was known for emphasizing a solid respect for the earth and the environment, as reflected in statements such as: “Each human body is independent and simultaneously the entire earth. A tree is as much a part of me as my shoulder. . . . I’m very grateful to have this practice. It sustains me and will continue to sustain me to the last moment of consciousness.”

Steve completed all but the dissertation for a doctorate of ministry in pastoral counseling from San Francisco Theological Seminary in San Anselmo. His additional advanced training in Internal Family Systems psychotherapy was reflected significantly in his work as a spiritual teacher and counselor.

When he received dharma transmission from Sojun Mel Weitsman in 1993, a sitting group he had started in Mill Valley in 1985 was incorporated as Dharma Eye Zen Center in San Rafael, which he led as its guiding teacher until his death. In addition, for many years he was co-leader of the Buddhadharma Sangha at San Quentin State Prison, housing California’s only death row for male inmates.

Within the last decade, his influence on Buddhism in the West began to be felt on a wider scale, starting with his service as board president of the Soto Zen Buddhist Association (2004-2006), and also on the faculty of Shogaku Zen Institute in a training program for Soto Zen priests called SPOT (Shogaku Priest Ongoing Training). 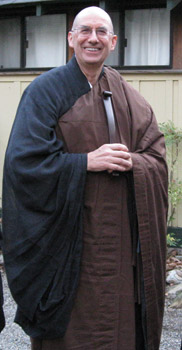 He became co-abbot of the San Francisco Zen Center in February 2007 (living at Green Gulch Farm), and in 2010 became the first to fill the role of central abbot as a part of restructuring the abbacy. In the summer of 2013 the SFZC Board had invited him to extend his term into 2017, a 10-year abbatial term. In a statement at his Stepping Down Ceremony on December 15, Abbot Steve reflected that he had been “a happy abbot.”

Referring to Zen Center, he also expressed confidence “that the fundamental practice that we hold dear can be fully realized and be a way to face the fears that beset suffering human beings—and be relieved of suffering not by turning away but by turning toward what is most difficult.”

Recent events surely tested this practice. As a result of the Basin Complex Fire in central California in 2008, he is remembered as one of five “fire monks,” who bravely defended Tassajara from the rages of the disaster after its evacuation. The story was immortalized in the book Fire Monks: Zen Mind Meets Wildfire, by Colleen Busch. In his last dharma talk, Steve compared his cancer to that fire: “It’s an engagement, and there are certain things that I can do to take care of this side, and the fire or the cancer will do what it does, and it’s a matter of paying close attention and keeping attentive and responsive, with the thought of being the most helpful to taking care of what’s most immediate. And so I’m learning fast, and a lot.”

Some of this same spiritual ferocity could be seen also in a simple daily practice described on his blog: “The ‘practice of gratitude’ for me begins simply with saying the word ‘gratitude’ and allowing whatever arises in thought to be regarded as loveable no matter who or what it may be. This immediately cuts off the mind of personal preference and acknowledges that everything, absolutely everything is fully participating in the fact of my existence this moment. The challenge of this practice often slaps me in the face and sets off a series of seemingly impossible barriers ….”

In his Stepping Down statement, he said, “Today I am also so grateful for this chance to say that this precious time I have been given has been a great blessing and chance to savor and enjoy this life.”

Another way that Steve commonly expressed his positive outlook was through song, sometimes blues tunes self-accompanied on the guitar. Often he would include the audience in a cappella singing as part of a dharma talk. Renditions of “Relax Your Mind,” “What a Wonderful World,” “Red Red Robin” and other songs could be considered “standards” at Steve’s talks.

Myogen’s teaching lives on in his many students, including a few who received authorization from him as independent teachers in his lineage, all in 2013: Renshin Bunce and Christine Palmer by dharma transmission, and Elizabeth Sawyer and Tom Millard by lay entrustment. His teaching, exemplified in his steadfastness and capacity for presence in life as well as through sickness and death, has also deeply touched scores of Zen students, practitioners, and audiences around the world, as evidenced by the many heartfelt statements received by both his family and Zen Center since his diagnosis.

A funeral service to be held at Green Gulch Farm Zen Center will soon be scheduled for the coming weeks. In lieu of flowers and in accord with Steve’s wishes, the family suggests that donations may be made to San Francisco Zen Center’s Widening the Circle Capital Campaign, on the web at imagine.sfzc.org. Comments to the family or Zen Center are also welcome on the Subtle Eye blog, or by mail to 300 Page Street, San Francisco, CA 94102.

For further updates and sharings, please visit subtleeye.sfzc.org, the blog dedicated to Steve during his illness.

Filed under Announcements, For Steve Stücky
By Editor The Great Leap

This site uses Akismet to reduce spam. Learn how your comment data is processed.

Paperpunch Theme by The Theme Foundry